Potatoes are rich in carbohydrates and fibre and so very satiating. They have a wonderful variety of nutrients including proteins and have been used as an important ingredient in areas where people lack food and nutrition. Most of the nutrition is contained in the skin so keep it on to ensure you get the most benefit out of them. Moreover, the skin is also alkaline in nature helping keep the pH level in your body in a better condition. Apart from the fibre, especially in the skin, potatoes contain vitamins C and B6, niacin and folate, and minerals like potassium, manganese, magnesium and phosphorous, all of which help in maintaining sugar levels. They also contain compounds like flavonoids, carotenoids and phenolic acids, which are antioxidants that help to fight free radicals that can lead to lifestyle diseases. With all these benefits all we need to be careful about is not to add oil to our potato dishes as that ruins all the goodness that potatoes can give us. 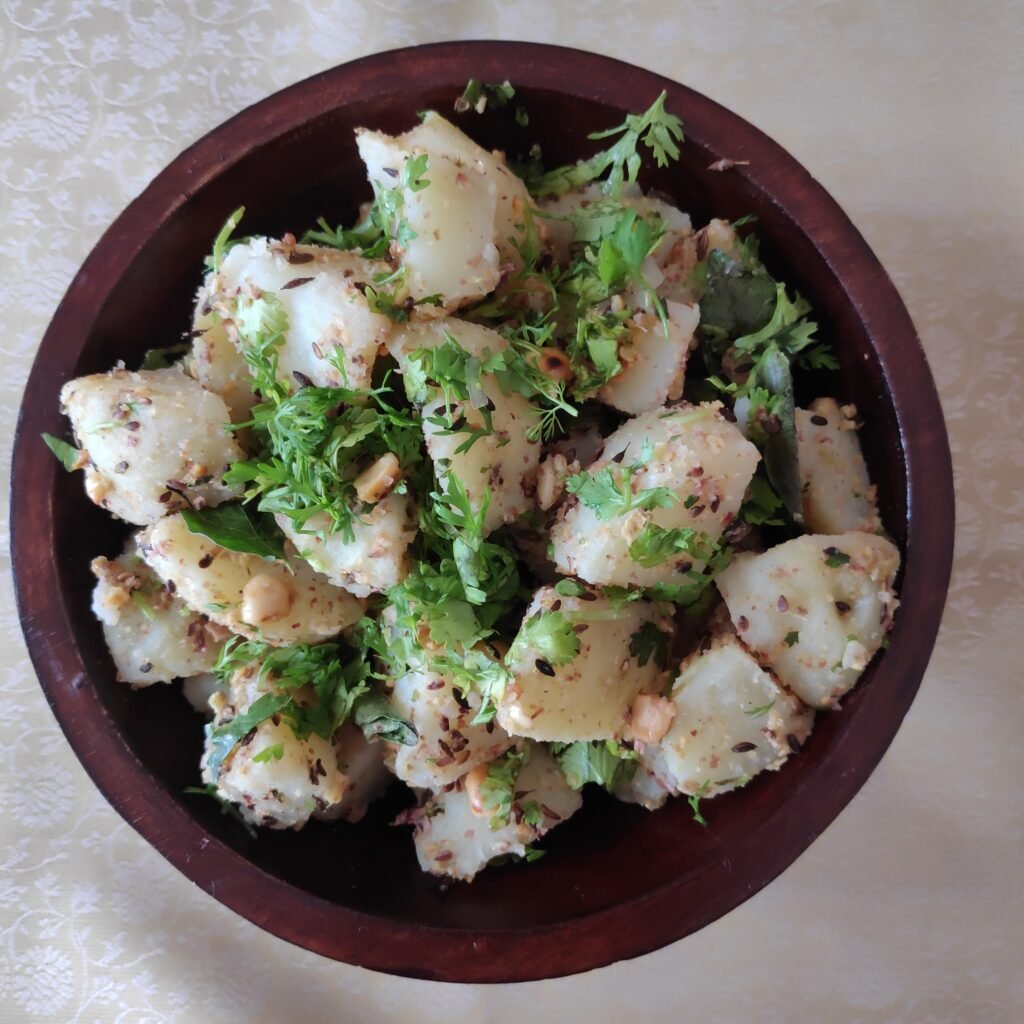 Potatoes are a versatile root vegetable and a staple food in many households and are packed with a variety of nutrients. Most of the nutrients are just below the skin so they’re better if cooked and consumed with the skin. Keeping the skin on not only ensures you receive the maximum amount of nutrients from the potato but the skins are also alkaline in nature and so aid in the healing process of the body.

Potatoes are rich in compounds like flavonoids, carotenoids and phenolic acids, which are antioxidants and help to neutralize potentially harmful molecules known as free radicals. When free radicals accumulate, they can increase the risk of chronic diseases like heart disease, diabetes and cancer. Colored potatoes like purple potatoes (not very common in India) can have three to four times more antioxidants than white potatoes. However, potatoes when fried or cooked with a lot of oil are pretty unhealthy, so it’s best to avoid French fries or fried potato dishes.

Poha is made by soaking the rice and then flattening and drying it. It can be considered to be an uncooked form of rice yet doesn’t really need to be cooked to be consumed. It has a reasonable amount of carbohydrates, some potassium, sodium and protein, and is easily digested.

Coconut is a great source of natural fats and lots of fibre. Fibre helps in digestion as well as regulating the absorption of nutrients.

Peanuts are a great source of plant protein and enhance the nutritional value of poha. Peanuts are packed with healthy fat, high-quality protein, and potassium, phosphorous, magnesium, and B vitamins. Peanut skins also contain antioxidants. Peanuts are best eaten raw after soaking and not roasted.

Curry leaves contain compounds that function as antioxidants that play an essential role in keeping your body healthy and free from disease. Antioxidants remove potentially harmful free radicals and suppress oxidative stress, a condition that’s associated with chronic disease development. They may help improve the fighting power of the body against cancer cells, as well as reduce the risk of getting heart disease and help improve the condition of the brain and its neurological system. Most importantly, it is said to be great for the growth of hair and to prevent graying. 🙂 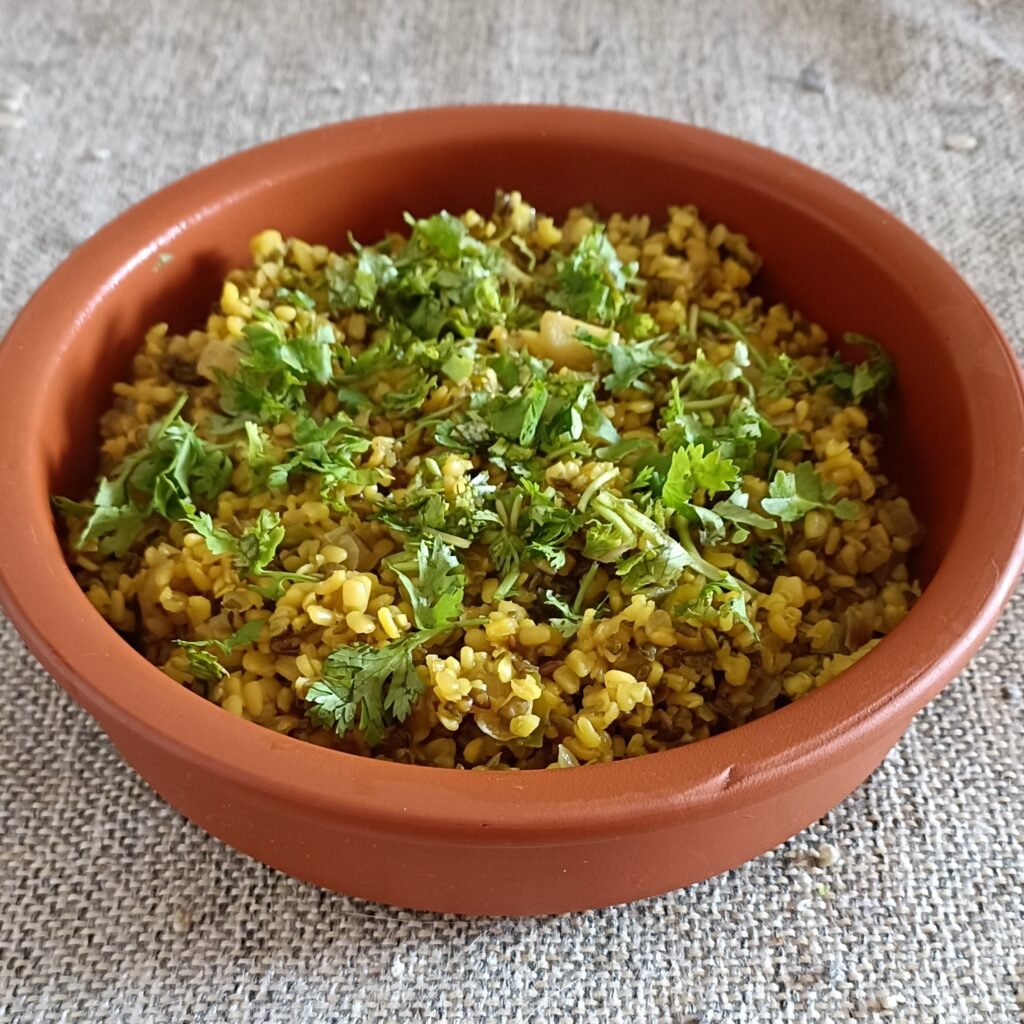 Moong bean is a legume native to India and is a low-carb, high-protein bean. In fact, moong is one of the best plant-based sources of protein. They’re rich in essential amino acids or those that your body is unable to produce on its own. It is rich in fiber, especially if it is used with the green skin on it. It is also rich in potassium and manganese, some B vitamins, and along with the fiber enhances the body’s capacity to fight and rectify lifestyle diseases like heart problems, diabetes, and hypertension. Like other legumes, it also contains resistant starch which is great for the gut microbiome. It’s much easier to digest than other pulses and legumes. Sprouted moong beans are better nutritionally and contain more free amino acids and antioxidants. In fact, sprouted moong may contain as much as six times more antioxidants than regular mung beans. So, all in all, it’s a great addition to your meals. 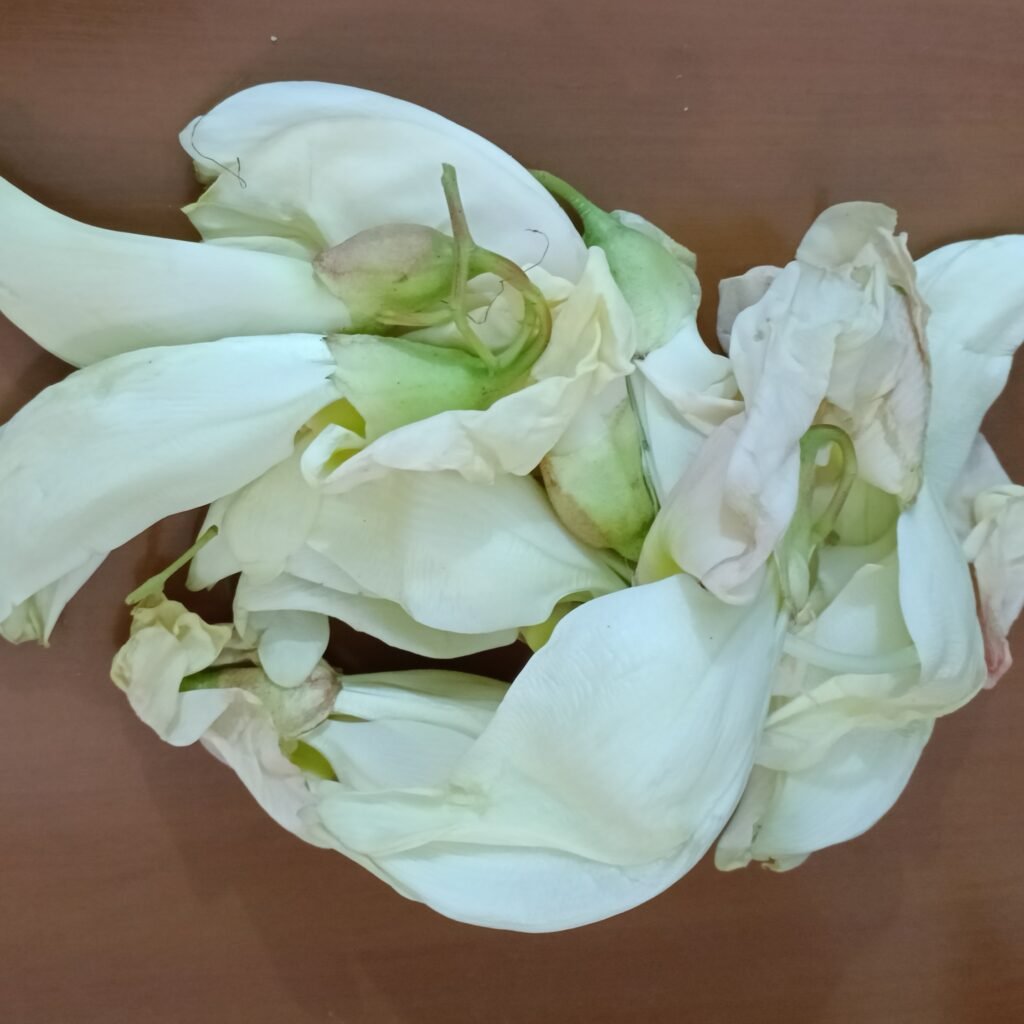 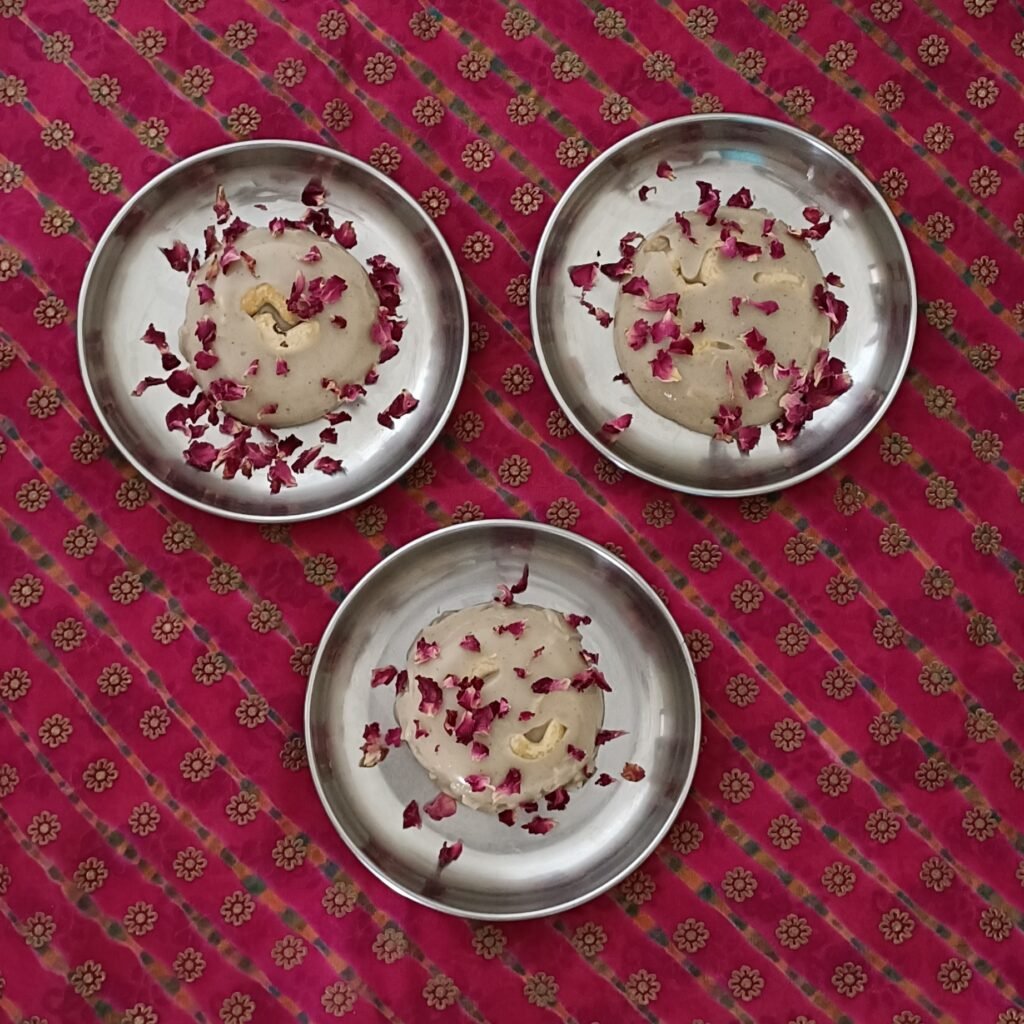 Millets are hardy small-seeded annual grasses that are cultivated as grain crops and grow in adverse weather conditions. They also require much less water and care as compared to grains like wheat or rice.

Ragi, like most other millets, is usually soaked overnight or for at least 12 hours to ‘activate’ the fibre in it. It is then dried in the sun for a few hours before being roasted and powdered to be ready for use. Traditionally, we Indians harvested rain fed nachni, sprouted it to get the nutrients to an optimal level, dried it and then ground it to a fine powder. This powder was sieved to get the nachni ‘satva’, cooked in water, sweetened, and used to wean babies off mother’s milk.

Ragi/Nachni is rich in niacin (vitamin B3), and especially minerals like calcium and iron because of which it has traditionally been used to feed infants and babies and to keep anaemia at bay in children. Sprouted ragi is also rich in vitamin C that helps absorb iron better.

Ragi/Nachni (finger millet) is rich in complex carbohydrates which may help in preventing blood glucose levels from spiking after a meal as they take longer to digest thus releasing energy slowly and keeping one satiated for a longer time. The dietary fibre may help to control the ‘bad’ cholesterol and raise ‘good’ cholesterol levels and lower triglycerides. The soluble fibre in ragi absorbs cholesterol before it enters the bloodstream whereas the insoluble fibre acts like a prebiotic supporting the good bacteria in the gut. 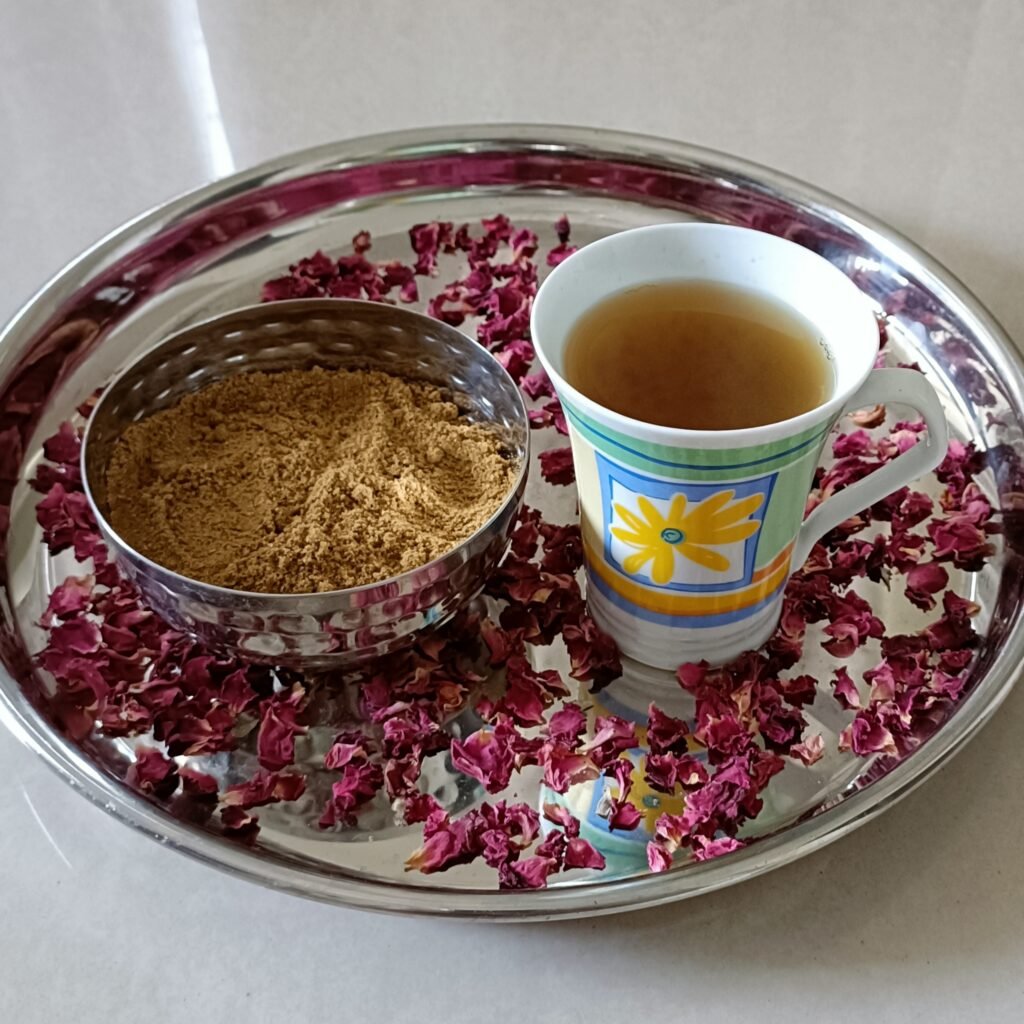 Coriander seeds are fragrant and rich in vitamins, minerals and antioxidants. They’re used very often in curries and other traditional Indian dishes in the powdered form. They are believed to have many health benefits including helping to lower blood sugar levels because of its diuretic property and reduce blood sugar levels by increasing enzyme activity in the body. In fact, coriander seeds should be used with caution as it has been observed they reduce blood pressure in a very short time and to a great extent. The vitamin K present in them is said to help prevent osteoporosis and support heart health. The antioxidants in coriander seeds may help reduce the risk of some cancers as well as slow the aging process. The antimicrobial compounds in them may help fight infections, and the anti-inflammatory properties they have may promote brain, skin, and digestive health.

Cumin seeds, like coriander seeds, are rich in vitamins, minerals (especially iron), antioxidants and antimicrobial/antibacterial compounds. Cumin seeds have been used to treat digestive problems traditionally and they have almost the same health benefits as coriander seeds.

Fennel seeds also have more or less the same properties. They are specially used as a mouth freshener after meals traditionally because they help reduce bad breath. This is because of the specific aromatic essential oil in them that has antibacterial properties. 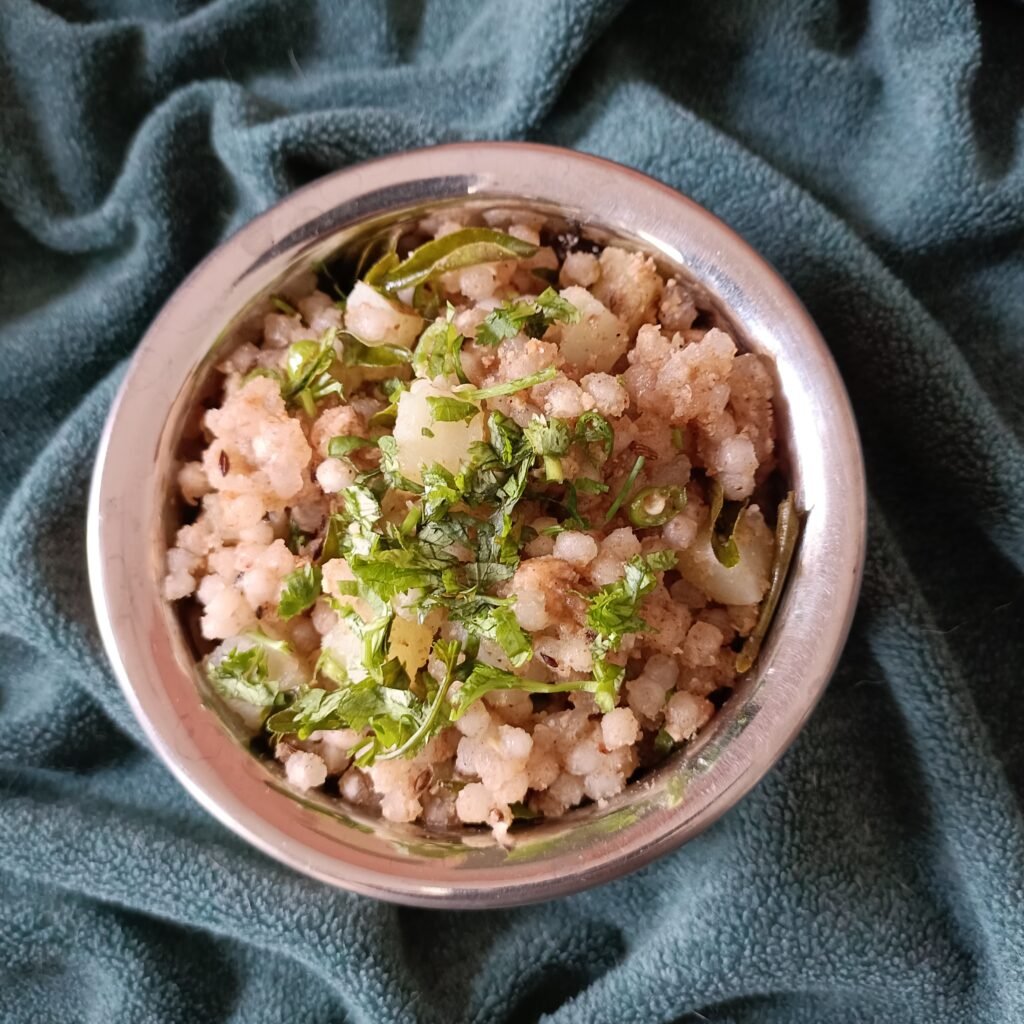 Flax seeds are tiny powerhouses of nutrition well known for their high content of omega-3 fatty acid alpha-linolenic acid (ALA), an essential fatty acid which means that your body cannot produce it and so you need to obtain it from the food you eat. It is important to grind the seeds before eating them as the oil is locked up inside the fibrous structure of the seed and it cannot be released when eaten whole.

Flax seeds also have high amounts of protein as well as soluble and insoluble fiber. Soluble fiber helps regulate blood sugar and cholesterol levels. It also promotes digestive health by feeding your beneficial gut bacteria. When mixed with water this soluble fiber becomes very thick and combined with the insoluble fiber content, flax seeds become a natural laxative, promoting good bowel movement, preventing constipation, and reducing your risk of diabetes. It’s recommended to drink plenty of water when eating these seeds because of their high fiber content. For people who are not used to eating a lot of fiber, incorporating flax seeds too quickly can cause mild digestive problems. These include bloating, gas, abdominal pain, and nausea. Chutneys are a great way to avoiding these problems as they are eaten along with a lot of other vegetables and pulses in our traditional Indian meals.